Hi (-:
I am trying to write my own infrastructure block to run the flow inside a new Render instance. It’s very similar to what is happening in the ECSTask block.
So I have this piece of code: 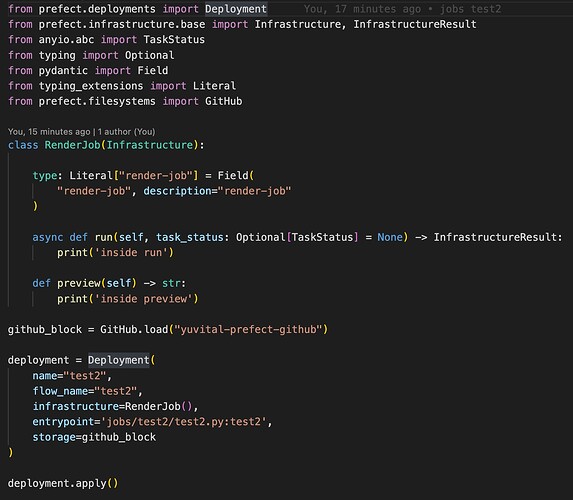 When running this flow (test2 flow) via the Cloud UI, I am getting this error:

Also, without the infrastructure=RenderJob() part, the flow runs successfully.
Any idea what is missing here?

I believe you would need to add an entrypoint environment variable as shown here:

<!-- Thanks for opening a pull request to Prefect! We've got a few requests to… help us review contributions: - Make sure that your title neatly summarizes the proposed changes. - Provide a short overview of the change and the value it adds. - Share an example to help us understand the change in user experience. - Confirm that you've done common tasks so we can give a timely review. Happy engineering! --> A potential fix for https://github.com/PrefectHQ/prefect/issues/7177 Uses a mechanism similar to our collections loading to allow users to define a list of modules to load on Prefect import via a setting. ### Example <!-- Share an example of the change in action. A code blurb is best. Changes to features should include an example that is executable by a new user. If changing documentation, a link to a preview of the page is great. --> Specifying a module that cannot be loaded ``` ❯ PREFECT_EXTRA_ENTRYPOINTS=foo python -c "import prefect" Warning! Failed to load extra entrypoint 'foo': ModuleNotFoundError: No module named 'foo' ``` Define `foo.py` ```python print("Hi from foo!") def test(): print("Hi from a method in foo!") ``` Specifying a module loads it ``` ❯ PREFECT_EXTRA_ENTRYPOINTS=foo python -c "import prefect" Hi from foo! ``` Specifying a callable for contained side-effects ``` ❯ PREFECT_EXTRA_ENTRYPOINTS=foo:test python -c "import prefect" Hi from foo! Hi from a method in foo! ``` ### Checklist - [x] This pull request references any related issue by including "closes `<link to issue>`" - If no issue exists and your change is not a small fix, please [create an issue](https://github.com/PrefectHQ/prefect/issues/new/choose) first. - [ ] This pull request includes tests or only affects documentation. - [x] This pull request includes a label categorizing the change e.g. `fix`, `feature`, `enhancement`

OK, do you mean I should add PREFECT_EXTRA_ENTRYPOINTS as a parameter of the deployment?

no, I meant it the same way as Michael described in the PR

Sorry for that, by I am totally missing this (-:
This PREFECT_EXTRA_ENTRYPOINTS env should be set at which stage? which part of the code?
I really could not understand it from the PR.

The code for your custom block needs to be available on the agent so that it can use that block to submit flow runs to Render. Current infrastructure blocks that Prefect offers are all installed via a PyPI package and the entrypoint configured for the package allows Prefect to discover those blocks and store them in an internal registry so that they are available for use within Prefect.

Practically, this means that you could have your infra block in a .py file (like render.py) on your agent and set PREFECT_EXTRA_ENTRYPOINTS to a command that will load that module when starting the agent.

@anna_geller @desertaxle
Thanks!
Let me try this and report back.

@anna_geller @anna_geller
Just updating that currently the way forward should probably be:

I am running this command in my local terminal.

I am running the command from the root folder.

It seems like this should be the correct syntax, but still getting an error.

Also, I think what we saw in the github issue Anna referenced in the top:

But doing the same with the agent:

Dose not work, as for some reason I think the code inside the agent is not looking at the correct place.

thanks, I’d submit a bug report on GitHub for it with full minimal reproducible example code, perhaps pointing to your sample repository to also show folder structure for imports?

This is a private repo, but I can create a public one. 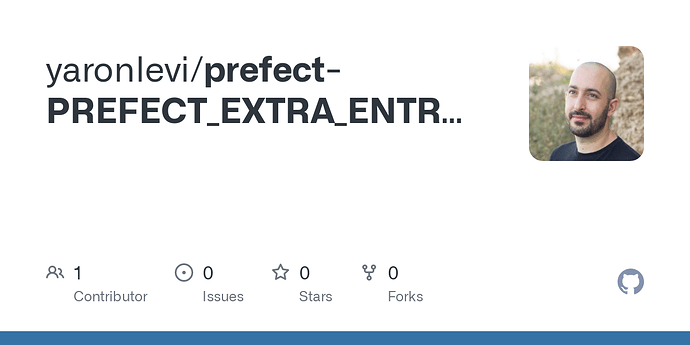 Contribute to yaronlevi/prefect-PREFECT_EXTRA_ENTRYPOINTS development by creating an account on GitHub.

I was asking to open a GitHub issue and reference it there - Discourse is a knowledge base, not a place to file bug reports

Ok got it. I didn’t understand you and thought you want to create the issue in Github

I’ll go ahead and create a new issue.